We are the inventors of the Emotional Acoustic Brand Identity (EABI) and developed the UCE method for it, which is based on synesthesia*.

With our special UCE method
(unique – catchy & complex – emotional), we make sure to create the right emotional acoustic space that really reflects the personality of our clients and their brands in a truly unique way – as unique as our clients.

We create music with character & personality that doesn’t sound like any other typical brand music.
We create timeless substantial “earworms”.

Who we serve and how

We want to use our skills to support exactly those brands that really help to make this world a better place.
Thus, we see our clients rather as cooperative partners who share the same goal.

With our EABI – which can be seen similar to a movie theme song – we create instant brand recall for our clients. But that’s not all.

An EABI also emotionalizes their brands and creates an emotional space for them to invite their audience and clients into the brand universe – on a conscious as well as subconscious emotional level.

With their very personal brand music we help our clients show their uniqueness, stand out and deepen the bonds between them and their clients on a subconscious level.

Since we consider personal growth as one of the most important areas, we focus on supporting brands in that field, such as conscious speakers and business coaches.

What makes us different

In order to create musical experiences that are as unique as our clients, we pursue another strategy than most audio branding providers.

Therefore we focus on the following 5 aspects:

musical substance
With many audio branding services, the focus tends to be on the sound, the surface of the music. While the sound is indeed an important aspect, we think it should not be more important than the actual musical content, which is the personality of the music.

If the musical content lacks a certain complexity and depths it’s impossible to create something truly unique.

Most audio branding services try to sound modern.
For us, however, modern means everyone is doing it right now.

Since our clients want to build a legacy with their brand, our goal is to create timeless music that outlives hypes and trends.

Most audio branding services advertise their scientific research systems. Unfortunately, however, this can only lead to rather sweeping acoustic assessments, which often result in a kind of “rinse and repeat”.

We, instead, focus on the highest degree of uniqueness and personalization.

personal emotions
While probably just about all audio branding services focus on general emotions, we focus on creating something that really touches our clients.

We believe that music that deeply moves and touches our clients becomes, so to speak, an acoustic extension of their personality, and thus is able to touch our clients’ audience more deeply as well.

All audio branding services that we know of offer their service to anyone who can afford it.

This is not compatible with our code of values.

We cannot reconcile with our conscience to support companies that contribute to the destruction of the planet or the harm of humanity. Therefore, we select our customers based on their values.

musical business emotionalizer & re-humanizer and synesthete*.
I’m the founder and head & soul of SONiNATE Productions.
I’ve been making music for more than 30 years and as a professional for almost 20 years.

I’ve invented the EABI and developed the synesthesia-based* UCE method in order to take audio branding to another way more personal and emotional level. 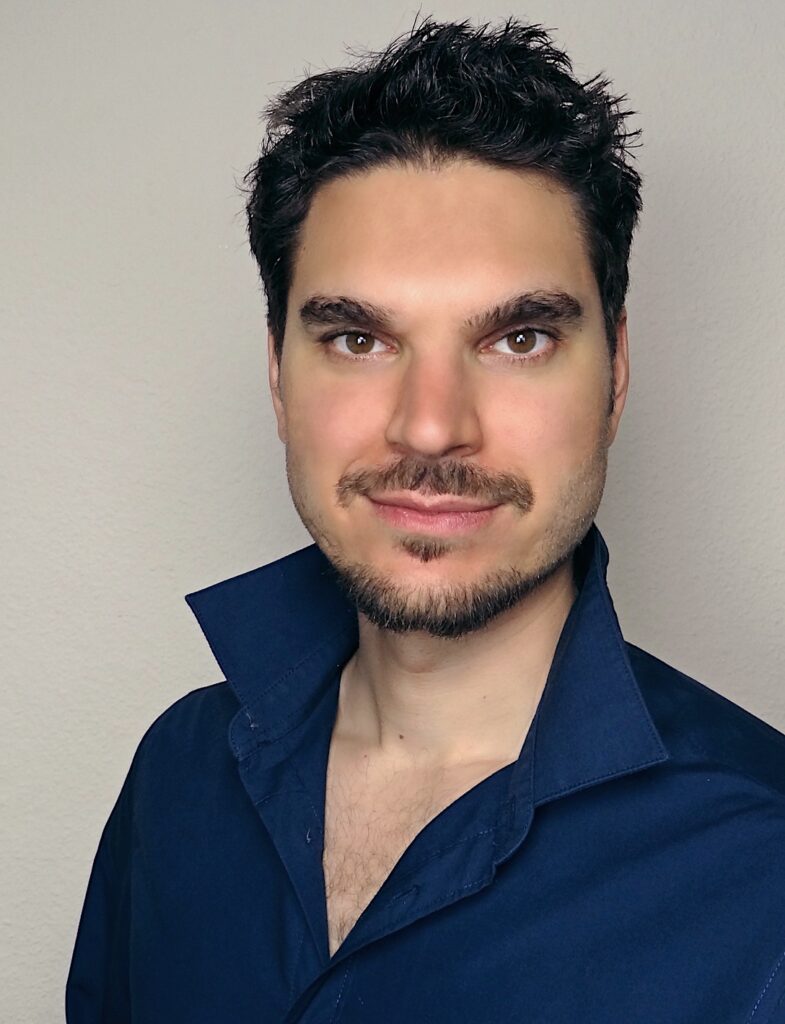 After quite a long musical journey through various genres and styles – from rock guitar player to professional opera singer (countertenor) and many steps in between – I finally discovered that writing music is what I can do best.

I’m also quite a good “musical judge of character” and a synesthete*.

Due to my synesthesia* I can also see sound and music, which is why my approach to composing might be a bit different too.

Thus for me music has a lot to do with colors and I love “painting” in many different colors and shades.

With SONiNATE Productions I connected my passion to a purpose, which is writing music for others and using music as a transformational tool.

With my music I want to encourage & empower people, give comfort, hope & confidence, show understanding and create connection to themselves and others.

Though I had been influenced by a plethora of musicians I’d say there are some musicians that influenced and inspired the style of my songwriting and composing the most. Those are Queen, Steve Vai, Chris Cornell and the music of the baroque period (Bach, Handel, Vivaldi, Caccini etc.).
However, I have absorbed diverse music almost like a sponge and merged it into my own style – whereby the music of the Beatles, Pat Metheny, Sting, C. Debussy, A. Schoenberg and countless other musicians from various genres, as well as diverse world music, should not remain unmentioned.

My musical journey started with being a guitar player and went quite soon pretty zig zag, which gave me the opportunity to get in touch with many different genres such as:

I studied classical guitar at the Richard Strauss Conservatory in Munich and my guitar professor encouraged me to also study composing. But it came different.
My countertenor voice was discovered and I moved to Leipzig to study opera singing at the Music University Felix Mendelssohn Bartholdy.

During that time I started playing baroque songs with my guitar and accompanied myself. I also wrote arrangements of some traditional folk songs for guitar and countertenor, which I got the opportunity to professionally record a few years later for my CD “Folksongs”.

After my exam I moved to Berlin and started working as a freelance countertenor, as soloist as well as in professional vocal ensembles.
I had been lucky to sing at some renown music festivals such as the Handel festival in Halle, the Ludwigsburger Schlossfestspiele, the Styriate festival in Graz and the Salzburg Aspekte festival. I even had the honor to sing and perform a few world premieres, some of them especially written for my voice.

But the more I sang the more I realized that being just a singer and just a countertenor – although I enjoyed being on stage of concert and opera productions – was not enough for me.

Thus I created a few solo programs for guitar and countertenor and later also for an additional loop station and I began to use more and more my not that classical sounding chest voice as well.

Yet writing arrangements for already existing music still wasn’t enough for me. I wanted to write my own music again.
I had been writing music throughout my whole life, mostly instrumental but stopped when I became a professional singer.

A few years ago I couldn’t hold back any longer and I re-started writing songs, first with lyrics that had been written for me, later with my own lyrics.

After a long musical journey I finally realized that writing music is what I can do best and what my heart is telling me to do.

As I wanted to be able to make my music sound as I could hear it in my head I began to learn as much as I could about music production. Thanks to our wonderful digital world I had been able to learn from some of the top music producers such as Fab Dupont, Warren Huart, Michael White and many others and I’m constantly learning.

* Synesthesia is the perceptual phenomenon in which stimulation of one sensory or cognitive pathway leads to involuntary experiences in a second one.
In my case it’s among others the combination of my hearing and my visual sense, which is why I can also see sound and music.